Grill at the Greens debuts at South Bend Country Club 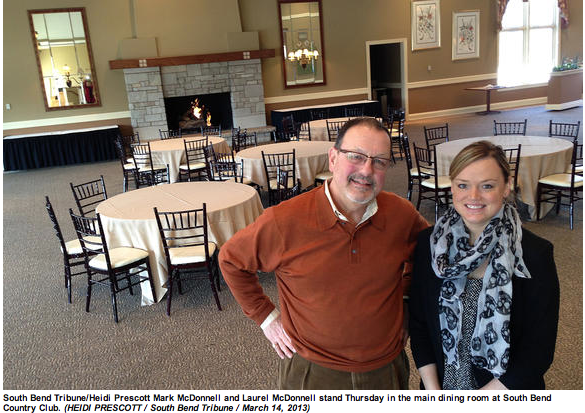 Mark McDonnell remembers first approaching South Bend Country Club board members about a catering idea about nine years ago. At that time, the 97-year-old private west-side club still handled its food and beverage operation in-house. It was common practice among member-only clubs. But this month, that common practice changed. And McDonnell is eager to explain how it expands his catering business. “Grill at the Greens” is the new member restaurant at South Bend Country Club that is operated by McDonnell and the LaSalle Grill. They are also now managing the poolside cafe, bar and catering all special events.

“As a private club — like many others these days — we struggled with issues like staffing, inventory levels and consistency in service,” Bob Wozny, president of the South Bend Country Club board, explains via e-mail.

The club had nearly closed in 2010 before it averted a sheriff’s sale and a listed judgment of $1.79 million. But new owners saved the club in 2011 with financial and emotional investments and set out to bring back the excitement and pride that had been missing for some time. Their goals included: making widespread improvements to the course and clubhouse, making the club more family-friendly, and improving customer service to build value in membership and attract new members.

“The flexibility in management and (McDonnell’s) reputation for and service made the decision quite simple,” Wozny says about bringing in an outside food and beverage operator. Because of the change, South Bend Country Club is offering a new “dining only” membership option that provides full access to Grill at the Greens and all other club dining events. McDonnell is planning monthly wine dinners and other food-related events. He also has started booking weddings, meetings, showers and birthday parties that will be catered by Grill at the Greens.

The dining-only membership costs $125 per year, says McDonnell, who hopes to reach 100 members in about a year. McDonnell will move staff between the club, downtown restaurant and another catering business called Events with Style. And his team will better manage the inventory that is critical in providing fresh quality dining choices to members, Wozny says.